Switches and other setting devices can be operated thanks to a remote positioning of control units in following cases:

maintenance in a protected space

… the vertically opening AVANTGATES can be used also for vehicles and/or people security access in fords, especially when river water level rises up for heavy rainfallresult, or during thaw periods.

Its system connects the electronic control unit with a floating sensor, regulated as gate opening or closing control. When the river water level allows the vehicles passing, Avantgates remain opened. Otherwise, when the river level is going to obstruct or block the passage Avantgates automatically close to prevent vehicles from passing through.

AVANTGATES lock system offers a safe guard locking for personal and process protection up to the highest category . The only one which can also be fully immersed in water. To guarantee this feature, we manufacture the  gates in stainless steel in order to run them even without the help of electric current network.

Regulations on hydrogeological, hydraulic and temporal hazards regulated by the following regulations: Legislative Decree 10 December 2010 219, Law 183/1989, Legislative Decree no. 49 of 23 February 2010, D. L. gs. 49 of 2010, associated with red colour (the most onerous in terms of associated risk) in the vicinity of widespread flooding in flat areas and with possible triggering of landslides. 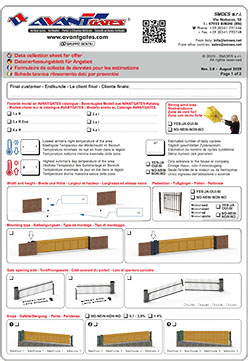 Comparation to other gates

This website uses cookies to improve your experience while you navigate through the website. Out of these, the cookies that are categorized as necessary are stored on your browser as they are essential for the working of basic functionalities of the website. We also use third-party cookies that help us analyze and understand how you use this website. These cookies will be stored in your browser only with your consent. You also have the option to opt-out of these cookies. But opting out of some of these cookies may affect your browsing experience.
SAVE & ACCEPT